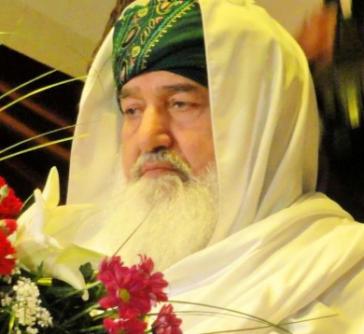 Shaykh ul Alam Qibla Pir Muhammad Alauddin Siddiqui Sahib is a Shaykh of the Naqshbandi Tariqa and a great Islamic scholar. They are also a descendant of the great Companion, Sayyidina Khalid bin Waleed (Radi Ta'ala Anhu), from their father’s side.

They were born in Kashmir on 1st January 1936, and grew up in the blessed presence of their father & spiritual guide (Murshid), Khawaja Pir Ghulam Mohiuddin Ghaznavi (Alahi rehma) thus obtaining spiritual blessing and grace (Fayz) throughout their childhood, and from their years of service and devotion (Khidmat) at the great centre of Nerian Sharif.

Hazoor Shaykh ul Alam Qibla Pir Muhammad Alauddin Siddiqui Sahib are a perfect example of the phrase, "a great son of a great father", as they perfectly reflect the teachings of their great and Beloved father Khawaja Pir Ghulam Mohiuddin Ghaznavi (Alayhi Rahmah) who dedicated they life to uphold the true legacy of our Beloved Holy Prophet, may Allah's peace and blessings be upon him.

Hazoor Shaykh ul Alam Qibla Pir Muhammad Alauddin Siddiqui Sahib's basic religious education of the Holy Qur'an and Tafseer was obtained from the famous Mufti-e-Azam Pakistan Hazrat Allama Mawlana Sardar Ahmed (Alayhi Rahmah) of Faisalabad. From a young age, they set out to study and seek knowledge about Islam and soon became a dedicated Aalim, whose learning was strengthened by solid faith and humble character. Eventually, they became an inspiration to thousands and millions of people, educating them regarding matters of religion and the betterment of society.

Hazoor Shaykh ul Alam Qibla Pir Muhammad Alauddin Siddiqui Sahib began to travel abroad and visited the UK, where they would stay for some time. During these early years of Islam in the West, they brought vital inspiration and leadership to the minority of Muslims residing here at the time.

Eventually, they established much-needed Masjids in London, Birmingham, Peterborough and various other cities in the country. They trips to the UK became much more frequent as their followers in the UK increased, and their projects in the region began to progress even further.

Eventually, they became extremely well-known throughout the UK. People grew eager to hear the words they spoke, and more importantly, the example they set of a true & righteous leader.

Their profound words and noble ways had a great effect in enlightening others with the Sunnah of our Beloved Prophet, may Allah's peace and blessings be upon him.

More recently, Hazoor Shaykh ul Alam Qibla Pir Muhammad Alauddin Siddiqui Sahib has set out to visit many countries including Scotland, Switzerland, Italy, Spain, Saudi Arabia, Germany, India and Turkey to deliver the true message of Islam to every corner of the world.

In the UK alone, their followers are in their thousands and this number increases daily, as well as many more from all over the globe who answer with open hearts to they call of peace, love, respect and humanity.

The first major project of the Trust was Mohiuddin Islamic University, which is today one of the best educational institutes in the whole of Azad Jammu Kashmir.

After this, Hazoor Shaykh ul Alam Qibla Pir Muhammad Alauddin Siddiqui Sahib established the Mohiuddin Medical College as part of the University and once this was completed, plans to build a medical site called Mohiuddin Hospital.

The main purpose of Mohiuddin Hospital is to provide vital medical care for free to the poverty-stricken & needy, as well as providing a further teaching ground for medical students to train & become fully-qualified doctors.

Since then, Mohiuddin Trust’s efforts and aid relief have been ongoing in all its campaigns, including the upbringing of the orphans it has taken under its wing as a result of the earthquake. The Trust has also played a vital role in providing disaster relief to the victims of the Pakistan earthquake in July 2010, and a team of volunteers are constantly on hand to ensure that all projects are continuously progressing.

In September 2006,Hazoor Shaykh ul Alam Qibla Pir Muhammad Alauddin Siddiqui Sahib set up the channel Noor TV (Sky channel 819) as part of the Mohiuddin Trust projects in an effort to counter the biased views of the mainstream media regarding Islam. The channel began live transmission a year later and is now available to homes worldwide. It is currently one of the best Islamic channels available, and is supported by Muslims all over the world.

In October 2009, a new announcement was made regarding plans for a much-needed Islamic girls college in the UK (located in Burnley, Lancashire) by the name of Mohiuddin International Girls College or MIGC. A year later, in October 2010, this new project swiftly progressed and the College opened its doors to students worldwide for its first ever term.

In 2010 saw Pakistan suffer the worst floods seen in a very long time, hundreds of thousands of people were internally displaced and suffered damage to their houses and livelihoods. At this great time of need, one voice was calling for humanity to help these people stood out, it was the voice of Hazoor Shaykh ul Alam Qibla Pir Muhammad Alauddin Siddiqui Sahib. Mohiuddin Trust was one of the first organisations to be working on the ground in various flood affected regions of Pakistan issuing essential food parcels; distributing portable gas cookers and handing out beds and blankets. Staff doctors from the Mohiuddin Medical College accompanied by student doctors volunteered their services towards helping victims. Mobile clinics were setup around some of the most remote parts of the affected regions and urgent medical attention was dispensed. Mohiuddin Trust sent out volunteers to areas where it was difficult to reach where they handed out money to families affected by the floods to help them.. Once the floods had cleared up and the damage left behind was assessed a project to rebuild houses and masjids in the affected areas was started. Building work is currently ongoing, helping people rebuild their lives.

In 2011 Hazoor Shaykh ul Alam Qibla Pir Muhammad Alauddin Siddiqui Sahib made an announcement regarding a water project in the area of Dera Ghazi Khan, this was an area known for a very arid terrain where water of any composition is hard to find let alone clean water hygienically safe for drinking. The water the inhabitants of Dera Ghazi Khan were using was also used by animals. Mohiuddin Trust went on to build wells which have now been completed and are functioning.

On 2 January 2012 just days after the announcement of having purchased a building for Mohiuddin Girls School and College (MGSC Birmingham), the inaugaration ceremony took place and MGSC was officially launched. MGSC provides high quality education to girls aged between 11-16 based on the national curriculum in an islamic environment. Aalimah courses are offered to girls and women aged over 16.

2012 saw the Muslim Ummah react in shock and regret at the release of the blasphemous and offensive movie "Innocence of Muslims". Hazoor Shaykh Ul Alam were at the forefront in maintaining calm amonst the UK Muslim community and also standing up to protest against such an offensive movie. Hazoor Shaykh Ul Alam set up a petition calling for changes to be made in law to prevent such acts in the future aswell as uniting the Muslim community to protest together outside the Houses of Parliament in Westmininster. This peaceful protest saw thousands of Muslims gather in London and show that we will not accept such lowly actions against our Beloved Prophet (SallAllahu Alayhi Wasallim). Hazrat Sahib met with numerous politicians including the Prime Minister David Cameron at 10 Downing St and later many key politicians at the House of Lords. At the end of 2012, Hazrat Sahib initiated legal action at the House of Lords to protect ALL religous figures against such blasphemy in the future.

Teachings of a Great Leader

Hazoor Shaykh ul Alam Qibla Pir Muhammad Alauddin Siddiqui Sahib are undoubtedly one of the greatest Sufi leader of our time, and his devotion for Almighty Allah & our Beloved Prophet may Allah's peace and blessings be upon him has inspired people young & old to integrate solid Islamic values into their lives.

They have touched thousands of hearts worldwide; the ill and poorly seek medical help from doctors, thus Hazoor Shaykh ul Alam Qibla Pir Muhammad Alauddin Siddiqui Sahib are the medic for darkened hearts in need of enlightenment. Through they compassion, many lost souls have found their way to Zikr (remembrance of Almighty Allah) and have realised their cure in devotion to Allah & our Beloved Prophet, may Allah's peace and blessings be upon him.

Hundreds of people seek to meet them daily, wherever they may be, eager for their blessings, advice and the honour to be included in their prayers.

Indeed, in these times of hardship and darkness for the Muslim Ummah, Shaykh ul Alam Qibla Pir Muhammad Alauddin Siddiqui Sahib are a shining beacon of light who guides us to truth, reminding us of the strength of Islam, and inspiring us with the patience, respect and peace which made Muslims before us victorious.

We sincerely pray to Almighty Allah to bless our Noble Beloved Shaykh,Shaykh ul Alam Qibla Pir Muhammad Alauddin Siddiqui Sahib with a long life, excellent health, cure from illness, comfort & happiness, and success in all their great efforts so that the Ummah can continuously benefit from their knowledge, spirituality and light. Ameen :)